I have been looking forward to this day all year. It’s the 15th of august and we’re getting ready to head up to our hunting cabin in Sweden. It’s the day before the swedish roebuck premier. It’s late summer, the weather is beautiful, and we’re so ready to get up there!

We got all our gear in Kim’s car and headed off to the ferry. We we’re not the only hunters on the ferry. Well, at least there was a lot of people in Härkila gear, so we made the assumption.
Our place is 30minutes north of Jönsköping. So after 3 hrs drive we made it to our little red house, on the top of the hill.
I was there for a couple of week over the summer. I was with my family on holiday and while we were there, we saw a couple of nice bucks.
Needless to say, we where super excited to come up and see what was going on.
When we arrived at the house late afternoon and hurried out for a walk, to see if we could spot anything. I went down to this big meadow, to see if i could find the buck i saw earlier in the summer.

I found a nice place on a ridge, overlooking the meadow. I was sitting in cover behind a bush, but had a good view over the whole area.
The sun was getting lower in the sky, and the air was getting a little cooler. There was beautiful light over the meadow and things start to happen.
A roe came out from the forrest. I took my binoculars, so i could better follow the situation. The roe started eating the shoots in the field. A young buck appears on the scene. He seems a little jumpy, and i’d soon find out why.
Out from the edge of the forrest steps a big old buck. A beautiful heavy 6-pointer. He’s obviously the boss around here, so that’s why the young buck was a little jittery.

The old buck started chasing the roe, and soon they’ed run around i circles, sniffing each other.

The roebuck premiere start tomorrow, and this is my spot!

We all meet back at the house. I brought a leg of roebuck with me, so that was our dinner sorted.

I butterflied it, and marinated it with garlic, rosemary and juniper berries.

We lid up the BBQ on the terrace and had a delicious dinner, while watching the sun go down over the lake.

None of us slept much. We were all to excited, so when the alarm clock went off at 3:30, we we’re all out of bed and fully clothed.
I went down to the meadow to se if the buck would come out. I was in the same spot as yesterday, and the sun started to rise. There was a heavy mist that covered the meadow. It was so beautiful in the pink morning light!

I kept my focus on the the area where the buck came out yesterday, and sure enough he came out with the roe. Just like yesterday.
Unfortunately, they where covered by the mist and there was no way i could get a safe shot. So i just watched their silhouettes, as the where dancing around i a circle.

The buck got what he came for, and disappeared into the forrest. The mist liftet, and the roe was still essing, but the buck was nowhere to be seen.
I decided to try a different spot. I had seen a lot of scrapings in the forrest behind the house, so that was where i’d try my luck.

I got up to the house, and started walking into the forrest, as quietly as i possibly could. I got to an opening, where we have a highseat. I got up in the highseat and used my buck call once, and up through the ferns, popped the head of a nice young six-pointer with very tall antlers.
It was incredible that i didn’t scare him off as i walked into the clearing, cause i must have only been 3-4 meters from him.

I used the buck call again. This time he charged across the clearing, stomping the ground and gave a loud yell. To show any female suiters, that he was the mack-daddy around here.

I was sitting in the highseat, but i couldn’t see him, so i used the buck call again. This time he walked right in front of the highseat. That was the end of him, and my first swedish roebuck.

With a proud feeling i phoned Kim and told about my succesfull morning hunt. I asked him to meet me with the car, so we could get the deer back to the house.

We all met for a quick spot of lunch, and made a plan for the afternoon. It felt like the rut was in full swing, so it was prime time to get out there and se if we could spot a few more bucks.

It didn’t take long before i nice 4 pointer showed up. I decided to straight away to let him be. He looked quiet strong, and would be a good buck to have around. It was a total pleasure to watch him, though. His antlers where strong and symmetrical and his red hide where shining in the warm afternoon sun.

A loud bang broke my concentration, and i could hear that i came from the meadow, where Isaac was sitting. Could he have shot the old 6 pointer?

I got a txt. Isaac had shot his first buck! It wasn’t the 6 pointer, but a nice four pointer.

I hurried over to help him out. Kim also turned up with the car.

Isaac told us about the hunt. It was a nice first buck, but ironically the 6-pointer turned up just as Isaac had fired the bullet to the 4 pointer, but the old buck quickly disappeared when he heard the shot.

I showed them how to gralloch the deer. Now we had two bucks to show for, and Kim decided to try the meadow, to see if that would bring him luck. I went back to the house with Isaac and the buck. 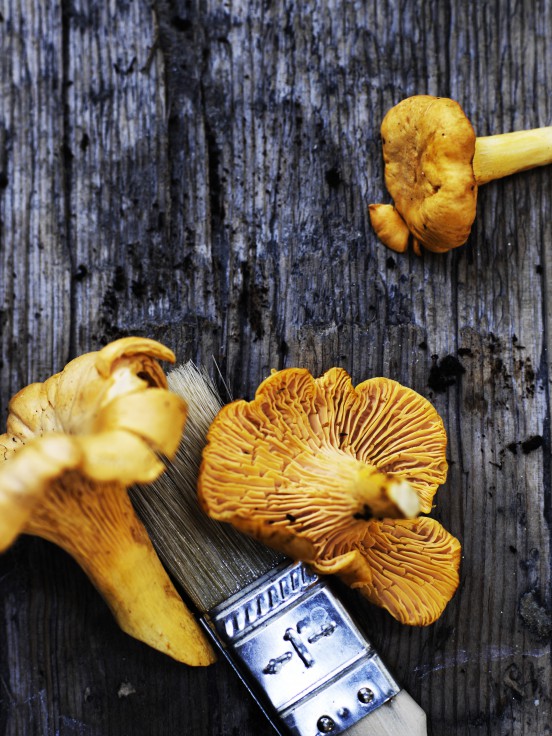 I had seen lots of mushrooms in the forrest, and i started thinking about what to cook for dinner.

After a quick search in the forrest i came back with a basket full of beautiful girolles.

I sat with isaac on the porch. We open a beer and looked at the evening sun setting over the beautiful lake. Suddenly we heard a shot. Me and Isaac look at each other with a smile.

We all got a buck each on the premier day.