Sometimes everything just falls into place. That was certainly true with my recent trip to Sweden.

I got invited to join my friend erik and his cousin Jacob for  a hunting trip to Erik’s parent place in Mårdaklev, in the west Gotland province, on the border to Halland. 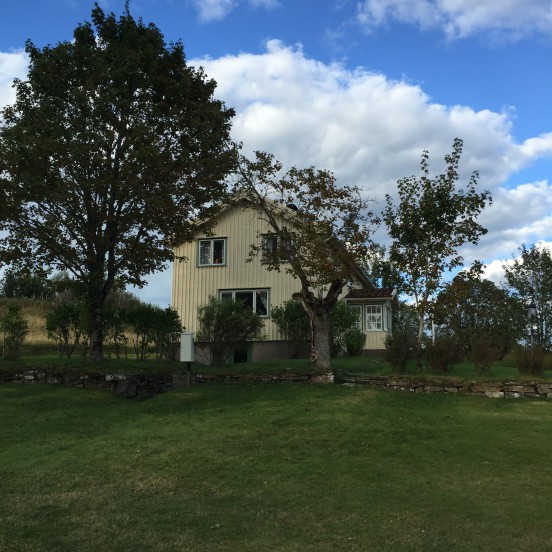 After a 3 hour drive we arrived at the house. The sun had set and it was pretty dark outside, but on the field across from the house we spotted 3 red deer. That got us really excited, maybe it was a sign of what was i store for us?
Jacob had brought a some meat from his freezer. a couple og roe deer fillets and a roastbeef of moose, which we had for dinner the same evening. The house had a proper oldschool cooker. An old “Bounders” that was powered by firewood, right up my street.

Eric had brought some cray fish, which we had for starters. I marinated the roastbeef with rosemary, thyme, garlic and olive oil. And made an al’ forno of potatoes and porchini mushrooms, and some braised kale to go with it. Not to forget, a delicious gravy.

We had Champagne while we were cooking, beer and schnapps for the crayfish and plenty of red wine to accompany the roastbeef, so when the alarm when off at 5am, we all felt a little rusty:)

We went to each our highseat. It was still dark, but the first rays from the sun started to hit the sky.

suddenly i heard a long moan from the forrest. We were in the middel of the rut season, and the roar from the stag echoed over the whole forrest. All my senses were on full alert, cause i knew that there would be a good chance that something could happen.

After a few minutes the stag appeared from the forrest. It was a big bull, minimum 10 pointer, with heavy antlers. It spotted me, so i sat as still as possible. After a while i got use to me and moved closer to the highseat. The bull came in on 30 meters from where i was sitting. It was a fantastic sight. The bull roared as the sun was coming up. It was a truly magical moment. 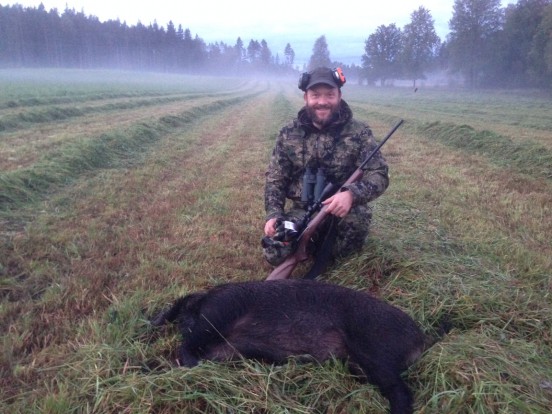 We were not allowed to shoot the bulls. The area had 1 doe and 9 calves on the quota.

I was watching the bull, when i suddenly heard movement behind me. A doe and her calf where coming down the slope behind me. I turned around as quietly as i could. The doe got a little suspicious, but the calf stod still. I took aim and delivered a perfect shot to the blade. The deer went down instantly.

Erik and Jacob heard the shot and came over straight away. We gralloched the deer and got her back to the farm.

We grilled the liver for lunch and had bruchetta with porchini and parmesan for lunch. Totally delicious! The lunch and a well deserved cold beer took the edge of our lingering hangover.

After lunch we went out with Hasse, the local chief hunter, to see the area where the moose hut would take place. It was a breathtaking area over 1800 acres. As a danish person you never come close to areas that size. It was amazing to see and on our trip we saw a 6 pointer moose bull. We got to watch it for some time before it ran into the woods.

When we got back to the house we were all buzzing, ready to go out hunting again. We all sat i different spots. It was pretty quiet where i was. I saw a badger, but he ran into the bushes before i could take it. I was getting dark and i decided to walk back to the house. On my way back i heard a gunshot. I looked over the meadow, and saw Erik searching for something. He had shot a fox. Good news. Jacob had seen loads of deer, where he had been sitting, but couldn’t get a safe shot. 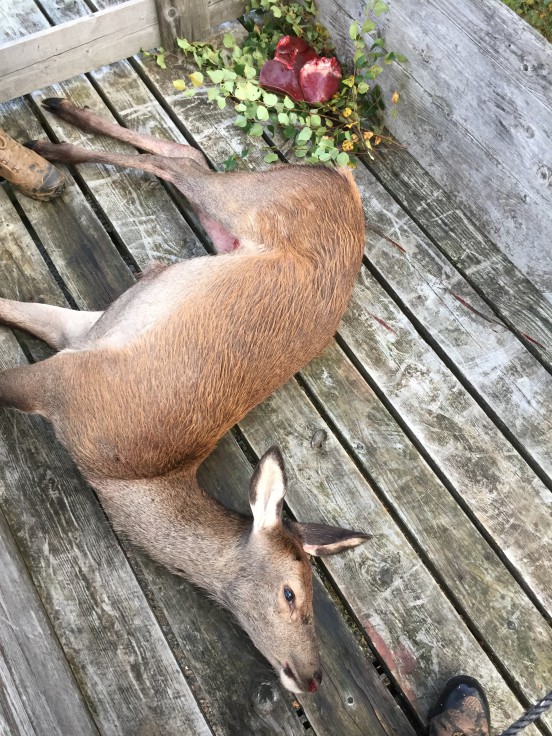 As we got back to the house we saw a group of red deer on the move, what a day!

I made a roebuck biryani for dinner, something Erik and Jacob hadn’t tried before. It was super delicious, and showed just how versatile game meat can be.

We were all pretty beat after the long day, so we all went to bed after dinner.

The alarm went off at 5am, and it was time to get ready for a new day. We made coffee and made a plan where we where all going to sit.

I got out to my highseat. I looked out over the meadow. There was a thick layer of mist over the meadow and the first rays from the sun where hitting the sky. It was a magical sight. 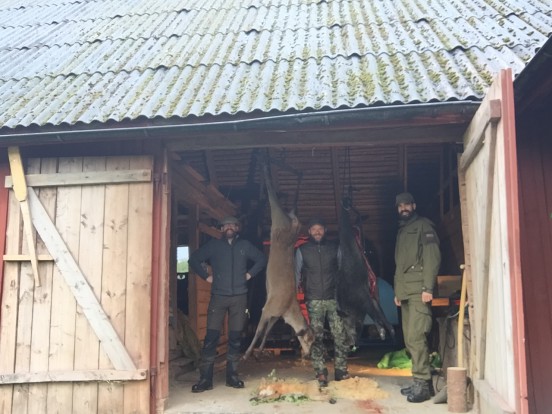 Suddenly i heard a roar from a stag. It sounded like it was quiet close by. Then an other roar, but from a different stag, a little further away. The two stags had a “roar-off”. It was an amazing sound, primal and ancient. I was expecting to see some deer coming out from the forrest, but two wild boar came out from the forrest instead. I followed the first one through the scope, but it started to increase speed. The second one stopped for a second. Bang!! A shot to the heart, and i got my very first wild boar. Absolutely amazing. What an experience.

Jacob and Erik couldn’t believe my luck, and neither could i.

It was the best hunting trip of my life so far.